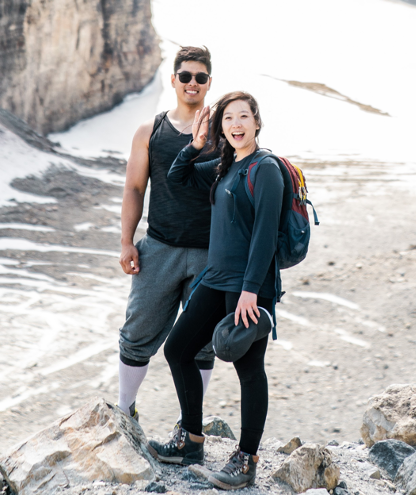 The Basics: Most recently hailing from Arlington, VA, I started my career teaching five-year-old kindergarteners and ended up as a marketer for an assisted living company that primarily served 85-year-olds (you can say that I have seen the full circle of life). Hobbies consist of grocery shopping, cooking, and eating…basically always making sure that the people around me and I are always well-fed.

How my partner would describe me: Perhaps overly reliant on the kindness of strangers to return lost items (I am not allowed to carry important documents/forms of identification when we travel). And happiest after morning pastries and coffee…or french fries.

Would you rather spend an evening drinking a viking helmet full of aquavit (norwegian alcohol that means “firewater”) or eating 5 lbs of lakris (licorice chocolate considered a gourmet Norwegian delicacy)? Aquavit…. But only  because I don’t like licorice. 😉

The Basics: I grew up in a medley of places, but most recently arrived at A2 from the DC area. I have been working for the U.S. Patent Office for the past 5ish years as a Patent Examiner and currently work from home. I enjoy any outdoor activity, e.g. climbing, hiking, fishing, and so on… I also love both video games and board games (but am not very good at them). I get easily addicted to things, so shows, games, sporcle, exploring random islands on Google maps, have all taken up more of my life than I care to admit. I was also only allowed to watch educational T.V. while growing up, so I know a large amount of useless animal facts from all those hours of Animal Planet (this is also why my childhood dream was to grow up to be a zookeeper).

How my partner would describe me: A mix between a snorlax and a slowpoke… but handsome (RIGHT JANET!?).

Favorite place I’ve traveled: New Zealand is my go-to answer usually… but I honestly don’t remember much of it anymore. So….. the actual answer is probably Banff. (But soon to be NORWAY!!!!)

Would you rather spend a year living with a pack of wild reindeer in Hardangervidda plateau or spend a week saluting a king penguin (Sir Nils Olav III) while serving in the Norwegian King’s Guard?: I would choose the reindeer. I feel like I would probably enjoy a year of chillin in the wilderness…. Although, I would probably get picked off by wolves or something for being the slowest. You win some you lose some I suppose.