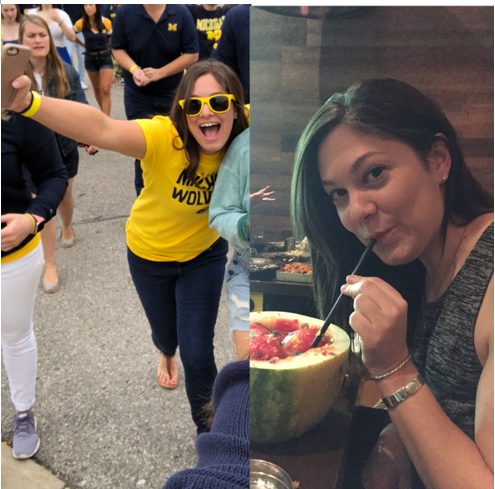 We made a quick list of the people that Liz doesn’t know at Ross:

Liz has the personality of a vodka soda with a splash of cran, which is, quite literally, what she will order at every single bar in the Caucasus. The Venn diagram of people who know Liz and people who love Liz is just a circle. You don’t want to know anyone who falls outside of the circle.

Have you ever been to Seattle? Do you love it? Do all of your friends talk about how it’s so fun and so hipster but also so quirky and so cultural? Of course they do – it’s where Liz is from. Prior to Ross, Liz spent a few years in LA and is now transitioning into a career in human capital consulting. If you spent a few years around people in Los Angeles, you probably would, too. (JK we <3 LA.)

We don’t want to use terms like “trek mom,” so we’ll call Liz our “trek supervisor.”  Who will be there to pick us up when we’re tired? Liz. Who will calmly remind Ben that we cannot illegally cross borders or embark on potentially deadly hikes? Liz. Who will force us to go to karaoke but then ensure our safe return home. All of your leaders, hopefully. But probably just Liz.

Ask Liz about: What goes with ranch dressing, Pets of Ross GroupMe (no, Liz doesn’t have a dog), and why Dominos is 1000x better than Cottage Inn

Don’t ask Liz about: Sheck Wes/Mo Bamba, the Seattle Sonics, and mascots (she has an irrational fear of them)