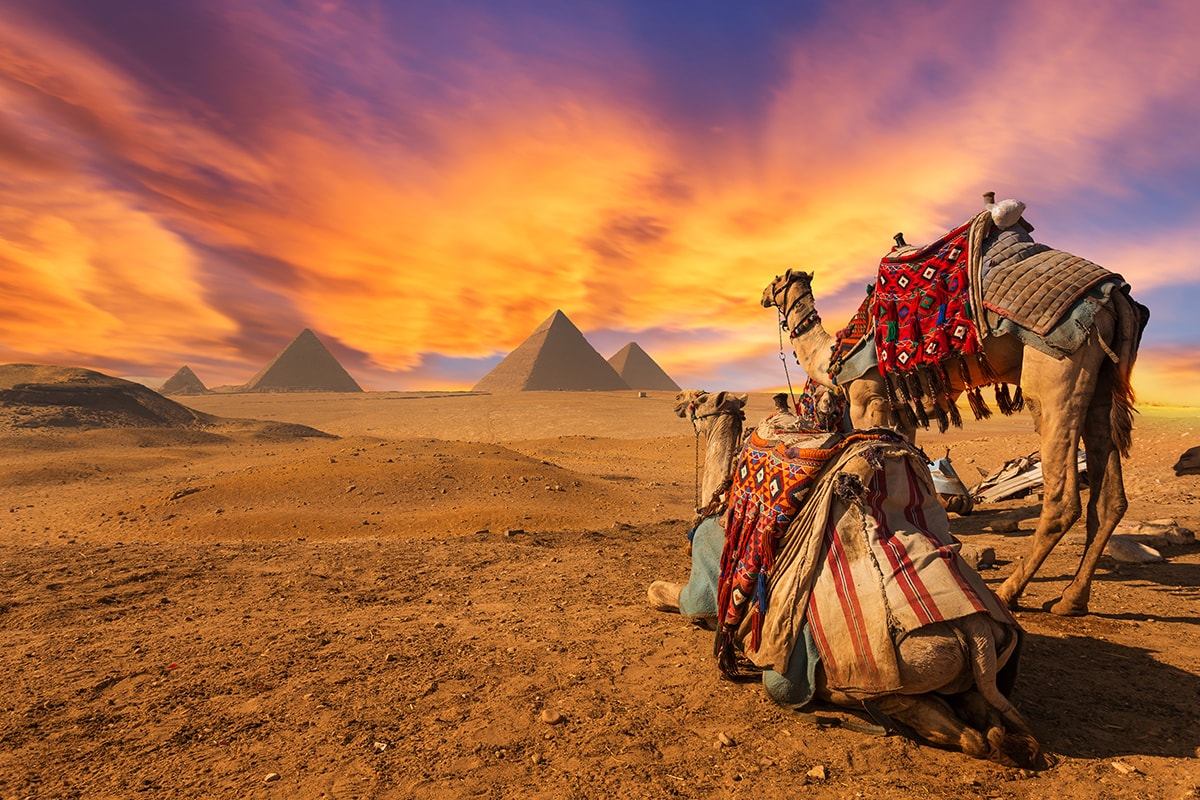 Want to see the Pyramids and Great Sphynx in person? Can you picture yourself camping (let’s be serious – it’s definitely closer to glamping) next to the Dead Sea? Do you want to go snorkeling at one of the top 10 places for diving in the world?? Want to make bffs for life? If so, look no further! Every year there is an MTrek to beat all other MTreks – and this is that trek!

This trek starts off with a few days in Jordan, a country steeped in history and must-visit cities like Petra. It proceeds south through Jordan with stop offs at the Dead Sea for some relaxation that will get your glow up started with healing mud baths and your WOW factor in with castles and forts that were built over 2000 years ago. We will follow that up with sailing to Egypt where we will see the pyramids, spend time on the Nile and have another day sailing on a boat – because can there be too many boat days?!

This MBA2 trek leader crew is unconventional and so is this trip. Along the way, you’ll get your Ross experience off to a great start and make memories that will last forever! If you don’t want to choose between culture, activity, and a legit nightlife (in Jordan), come trek with us!

Ahlan Wa Sahlan! Welcome to Jordan, cosmopolitan and contemporary, yet steeped in history. Your adventure begins with a Welcome Meeting and an evening on the streets, where you might pick up a coffee from one of the cafés and partner it with an ara’yes, a toastie filled with spicy mincemeat.

This morning you’ll travel to Mt Nebo spot where the prophet Moses is said to have seen the 'promised land' and is supposedly buried. Explore the remarkable mosaics of the 4th-century church. On a clear day, the views over the Dead Sea to Israel are spectacular. Then you’d better have brought your swim gear as you can wash of the dust from exploring with a dip like no other. We’ll then drive to the shores of the Dead Sea, the lowest point on Earth (420 meters below sea level). This isn’t actually a sea but a super-salty lake (dead because of the lack of life in it) where the density of the water means you’ll go for a float, not a swim. Spend some time relaxing here and get some classic floating pictures. The mud here is supposed to have healing properties, so why not cover yourself from head to toe for a nutrient-rich natural mineral mud bath. You’ll then make a stop to explore the evocative ruins of the castle of Kerak – a seven level fortress, with many rooms and passageways buried deep into the hill – and to discover the legends of the 12th-century battles between the Crusaders and the Muslim armies. You’ll then continue on to Petra for the night (approximately 4.5 hours).

Petra is justifiably on most people’s list of ‘must-visit’ places. It's the jewel of Jordan, the lost city of the biblical Nabateans, an impressive series of tombs and dwellings hidden behind ornate facades carved directly into the rock, and one of the new Seven Wonders of the World. Dating back to the 6th century BC, the site was lost to Western minds until it was rediscovered in 1812 by a Swiss explorer – he dressed up like a local to sneak in and then revealed the secret to everyone. Thankfully he did though, because this isn’t something you’d want to miss out on. Squeeze through a mile-long narrow path, known as the Siq, through huge towers of rock and get your first glimpse of the iconic Treasury – it’s impossible not to imagine the armies and traders who made their way down here in the ancient times. It’s amazing to think that this awesome, intricate building entrance was hand carved out of the rock. The site is surprisingly big, and you can explore the old Roman road, temples and several old tombs, as well as the rock-hewn amphitheater. In the afternoon, you have the opportunity to explore the rest of the site at your own pace. For those with the energy, there's the challenging but highly rewarding walk up the steps to the stunning Monastery. Maybe seek out a Turkish bath for the perfect end to an incredible day.

Follow in the footsteps of Lawrence of Arabia with a short drive to the extraordinary desert scenery of Wadi Rum, a rugged moonscape of huge sandstone mountains. A 4-hour jeep safari will take you through some of the most beautiful and sublime desert scenery on the planet, a true highlight of this trip. Wadi Rum is full of weird and beautiful lunar-like rock formations, and traces of ancient civilizations can be seen in the many carved inscriptions found throughout the area, from pictographs to Thamudic, Nabataean and Arabic texts. The most enduring monuments in Wadi Rum are those carved by nature – the natural rock bridges, towering rose-colored sand dunes and scattered rocky peaks. Tonight you’ll sleep in a simple desert camp, with the choice of sleeping under a camel hair tent or out under the stars. Enjoy a delicious dinner cooked in an earthen oven by your Bedouin (which means ‘Desert Dwellers’ in Arabic) hosts. Conditions are basic at the desert camp, but the hospitality of your hosts is legendary, and you'll treasure the memory of sleeping beneath the twinkling desert night sky. Notes: A mattress and blankets are provided. Western-style toilet facilities are available.

This morning you’ll leave Wadi Rum and travel to Aqaba where you’ll board a ferry to cross the Gulf of Aqaba and continue your journey to Egypt. Dahab (meaning 'gold' in Arabic) has transformed from a Bedouin fishing village into a popular tourist town, thanks to the excellent conditions for activities like diving, windsurfing, and rock climbing. The town hasn't lost its authenticity, however, and it retains the low-key appeal that attracted bohemian travelers in the 1970s.

Check out your hotel In the morning, pick up your mask head to the Blue Hole for some snorkeling at one of the top ten diving spots in the world. The area gets its name from a submarine sinkhole about 94 meters deep, with an arch in the coral reef down at 54 meters – a challenge that’s only open to highly experienced technical divers. Snorkelers can enjoy one of the greatest spots in the Red Sea here. Float on the surface and look down into an endless world of blue, then make your way around ‘the Bridge’, where the visibility is always great and the untouched coral swarms with all different types of colorful fish and marine life. After you’ve had your fill of snorkeling, return to Dahab, Refresh at your hotel in day use room before drive to Sharm El Sheikh for boarding flight to Cairo.

Check out your hotel, get ready, get set, for an experience of a lifetime – a half-day trip to the Great Pyramids of Giza! The Giza Plateau is a formation of three pyramids, where a father, son, and grandson constructed their afterlife tombs and mapped their journeys to the afterlife. It’s still a bit of a mystery as to how the pyramids were constructed and how long they took to complete, but there’s no question that the pyramids still represent the pinnacle of ancient Egyptian architectural accomplishments. The whole area, really, continues to hold many secrets yet to be uncovered, making the pyramids one of the most alluring and inviting places in the world. Our job is to help you tick off that bucket list item, and then some, with a half-day tour to the pyramids that’s going to prove to you why everyone reveres this site so much. What sets our Pyramids tour apart from the others is that we beat the tourists and arrive at the Giza Plateau well before the crowds and that ruthless midday sun. We also treat you to a local lunch! Pyramids, Sphinx, and lunch? Oh my! Our day starts by seeing the guardian of the necropolis, the Sphinx (you know, the one with the missing nose!), which stands in front of the second Pyramid of Khepren. We will enter the Giza Plateau from the Sphinx Gate to beat the crowds to the site, and after seeing the Sphinx, we’ll walk to the mysterious great pyramid of King Cheops, where you can marvel at the sheer size of the construction, and try and formulate your own theories as to how it was built. Our Pyramids tour continues to the second Pyramid of Giza, which is the second largest and the only pyramid that still carries part of its original casing. From there, we’ll continue to the third and the smallest of the Giza Plateau pyramids. And no visit to the Pyramids of Giza would be completed without stopping at the panoramic view point where you get to see the all the pyramids of Giza in the one spot (and take a photo like the ones you see in travel books – free of tourists! Well, almost…) Leaving the amazing pyramids behinds, we’ll head back out to the streets of Cairo and stop by a local restaurant for lunch. We’ll be treating you to Koshary, a dish of rice, pasta, lentils, fried onions, and chili sauce, and a favorite among young local Egyptians. After lunch, we’ll drop you back off at your hotel for refreshing before boarding the overnight sleeping train to Aswan. Bedding and air-conditioning are provided.

The Nile, Elephantine Island and white-sailed feluccas: welcome to Aswan, Egypt's southernmost city. Its easy-going charm is due in no small part to its large Nubian population. This morning you’ll board an iconic traditional Egyptian sail boat board, a felucca, for a morning sail until lunch. After lunch aboard the felucca, arrive at a Nubian homestay on the West Bank of the Nile. Explore the Nubian way of life here with a walk through the surrounding countryside and agriculture fields to reach the homestay. The tranquility of the location is indescribable. The house is in the Nubian style, with a sandy courtyard in the middle where the family gathers for meals, and to the sides are the rooms where they sleep. These are also the rooms that you’ll be staying in for the night. Get into the swing of Egyptian life by lending a hand in the kitchen to help Nubian cook dinner, or maybe kick around a football in the courtyard with the kids. There are few better ways to understand a country and its people than with a local homestay.

Board a felucca, a traditional wooden boat with broad canvas sails, and spend a half day out on the river, watching rural Egyptian daily life play out on the banks. Your Nubian sailing crew provides lunch, which are hearty and delicious. In the afternoon transfer to Aswan station for boarding the sleeper train to Cairo.

You're free to depart at any time after the early-morning arrival, but please do not arrange departing flights before 4pm in case of any travel delays or bad traffic.