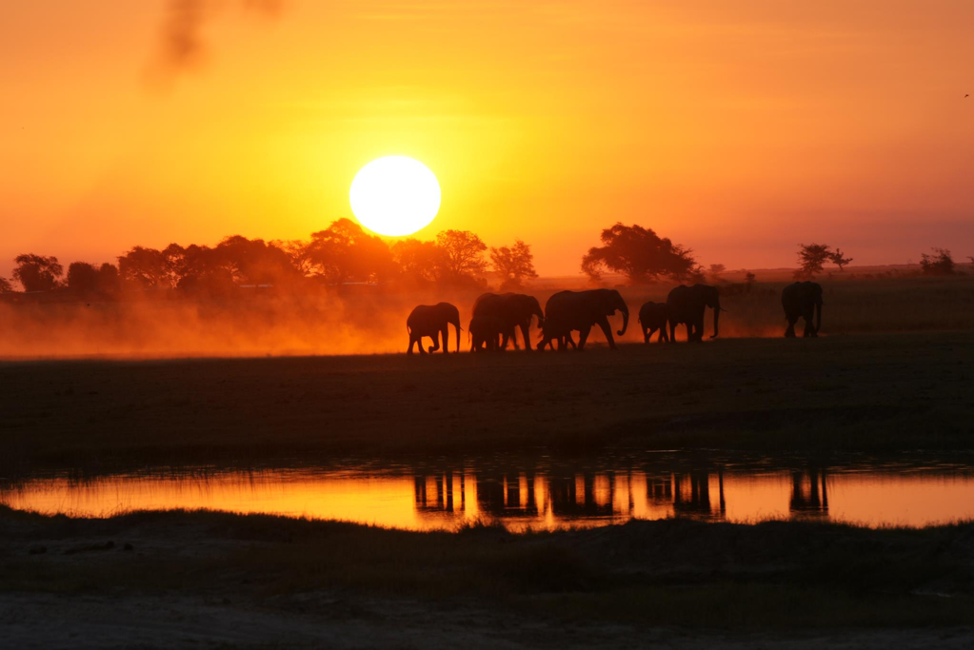 Let’s be honest, this is the trip that you’ve been dreaming of since 3rd grade. A safari so real it puts Planet Earth to shame? Check. River cruise with hippos? Done. Night drive to see the watering hole come alive under the star-filled African sky? Of course. Raft the Zambezi? Add it in! Sit in the Devil’s Pool atop Victoria Falls? Do it – you won’t!

Welcome to the dream MTrek.

We’ll kick things off in Africa’s adventure capital, Victoria Falls, with a warm welcome party before hitting the road. First up: Hwange National Park, Zimbabwe’s biggest. Sitting at the edge of the Kalahari, you’ll spend two days getting up close and personal with everything from elephants and zebras to lions and cheetahs. Not enough nature? We’ll be swinging on down into Botswana to Chobe National Park to see a different side of the continent: where the desert becomes wetlands. After a few more game drives and a river cruise, we’ll return to Vic Falls for a surprise event! We’ll round out our last few days with some showstoppers: a hike to the thunderous falls (bonus points if you actually go in the Devil’s Pool), a rafting excursion, and a farewell dinner before we’re on our way back to the good ol’ US of A.

Pack your backpack, grab your passport, and wave goodbye to your new friends. It’s time to get out of the Arb and out into the world. Adventure is out there! Just don’t forget the sunscreen.

Touch down Zimbabwe! You’re probably thinking “man, I can’t believe I survived orientation - that was crazy! It’s time for some R&R to prepare myself for classes in a few weeks.” WRONG. After a quick stop-in at the hotel to drop our bags, we’ll be kicking off the trip the right way: with a walking beer and gin tour of Victoria Falls. Time to scope the local scene for southern Africa’s finest. Buckle up, campers. The adventure begins.

Rise and shine! We’re hitting the road early for our first phase of our adventure by heading out to Robin’s Camp in Hwange National Park. This ain’t Leslie Knope’s kind of park either. It’s not just big. It’s big big. And it plays host to some pretty cool animals that thrive within the parks’ boundaries (millions upon millions of big herbivores being stalked by cheetahs and painted dogs!). We’ll be spending the day out on game drives in the savannah where we’ll try and capture the grandeur of the African wilderness before putting our phones away to just let it all sink in: we’re deep in it. Back at camp we’ll end the day in the pool, watching the sun set, with a cold beer in hand. Just sit back, vibe, and watch the neighborhood pride of lions. Feeling extra adventurous? As the stars come out, you’ll have the option to join your leaders on a special night drive! Time to see a different side of life: one where it’s cool enough for the big cats to hunt.

Wakey wakey eggs & bakey! You thought you had it all yesterday, but the nature offerings in this part of the world are nothing short of endless. And so back out on the trail we go- this time focusing on woodlands. We’ll see some familiar faces (elephants! So many elephants!), and hopefully some new (panthers?!). Time to get competitive with our photography so that we can provide that peak #content later. Then, back at camp it’s time to crush a power nap before getting geared up for MYSTERY THEME NIGHT #1! Prizes for the best costume.

Up and at em! It’s not goodbye, just a see ya later, Zimbabwe. We’ll be crossing the boarder into Botswana en route to Chobe National Park. Sitting at the bitter edge of the Kalahari, Chobe really brings it on the nature front. Every year the desert springs back to life as rains flood outward from the Zambezi producing one of nature’s greatest spectacles. What’s that you say? We’ll be there right as this is happening? What luck! It’s almost as if you planned it that way! (We did. This year’s rains are #Sponsored by Deloitte. And yes, they are blessed.) And so out to look at it we will go: deserts to vlei to the mystical Linyanti Swamps. Pick an animal, any animal, and it’s probably found here.

Good morning Botswana! Today, we’re getting wet. Not literally (well maybe), just the scenery- we’re focusing on wetlands! Kicking the morning off, we’ll be going out to spend a few hours splashing through marshes and rivers to see some new faces that thrive in this unique park’s ecosystem. What? Not close enough? Fine. All aboard! We’ll be spending one dope afternoon cruising around the river (beer in hand, I’m sure.). 10 points if you can feed one of the hippos your fruit.

No wakeup call today. Spend the morning sleeping in - you deserve it! We’ll be getting a later start and driving back to Vic Falls. What to do with the afternoon though? That’s for us to know and you to find out. Let’s just say it’s everybody’s favorite phrase: “team building exercise.”

Oh and those falls, they’re thicccc! Look alive, campers! We may be back in civilization, but the adventure never stops. Today’s task: hike through the rainforest to explore one of the greatest natural wonders the world has to offer: VICTORIA FALLS. The towns eponymous attraction will be sure to live up to the hype. Longer than Niagara (4x) and with the largest sheet of water of any waterfall in the world, the Smoke that Thunders will actually get you wet. Pack that selfie stick and your bathing suit, it’s time to give your parents a heart attack with an afternoon stop in the Devil’s Pool. #PeakContent for sure. Later in the evening, we’ll coalesce once again for our second MYSTERY THEME NIGHT. Time to party till our panties fly off.

Oh you thought it was over just like that? Not so fast! If you’re still wearing your underwear from last night, then today’s activity will be sure to knock your knickers off. We’ll start it slow by exploring the Boiling Pot area. Misty AF, this location offers another dope look at the falls. Nice. But what happens when an enormous waterfall plunges into a basalt gorge only 40m wide? One dope ride, that’s what! Grab a helmet and a paddle, because we’re going on one adrenalin-filled white-water adventure today!!! Remember… you’re supposed to be IN the boat, Gilligan. Then we’ll finish things off with one helluva braai (that’s Afrikaans for barbecue). Traditional drum shows and a real down home African feast is the only true way to send us off in style. Hope you brought your dancing shoes!

We hate to see it, but all good things must end (Soojin’s orders). But it’s not farewell - we’ll be seeing you back in the Arb for some more rollicking good fun. Totsiens, campers!